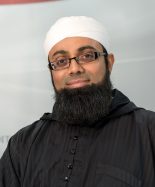 Imam of the Islamic Foundation of Toronto and founder and director of Mathabah Inc.

Shaykh Yusuf Badat was born and raised in Toronto, Canada. He has studied under some great scholars, receiving several formal authorizations in the sacred sciences with top honors. His commitment to the sacred sciences began early in his life when Allah blessed him with the ability, by age 14, to complete the memorization of the Holy Quran. He completed a rigorous 6-year Alim course at Darul Uloom Zakariya, South Africa where he achieved his masters in the Islamic sciences, which included but was not limited to, language, exegesis (tafseer) and jurisprudence (fiqh). He earned authorizations in Hadith under the Grand Mufti of South Africa- Shaykh Radha-ul-Haq. Shaykh Yusuf Badat is an Ontario registered minister of religion & licensed marriage officer. He also holds a diploma in Network Administration from the Toronto School of Business.

He has served as Imam since 1999 at Masjid Anwarul Islam of Malton (Masjid Saliheen) in Mississauga, Canada. He is also been an instructor at the Toronto Shariah Program and the Uloom Program. Shaykh Yusuf Badat is the founder and director of Mathabah Foundation. He is an active executive member of the Canadian Council of Muslim Theologians CCMT.