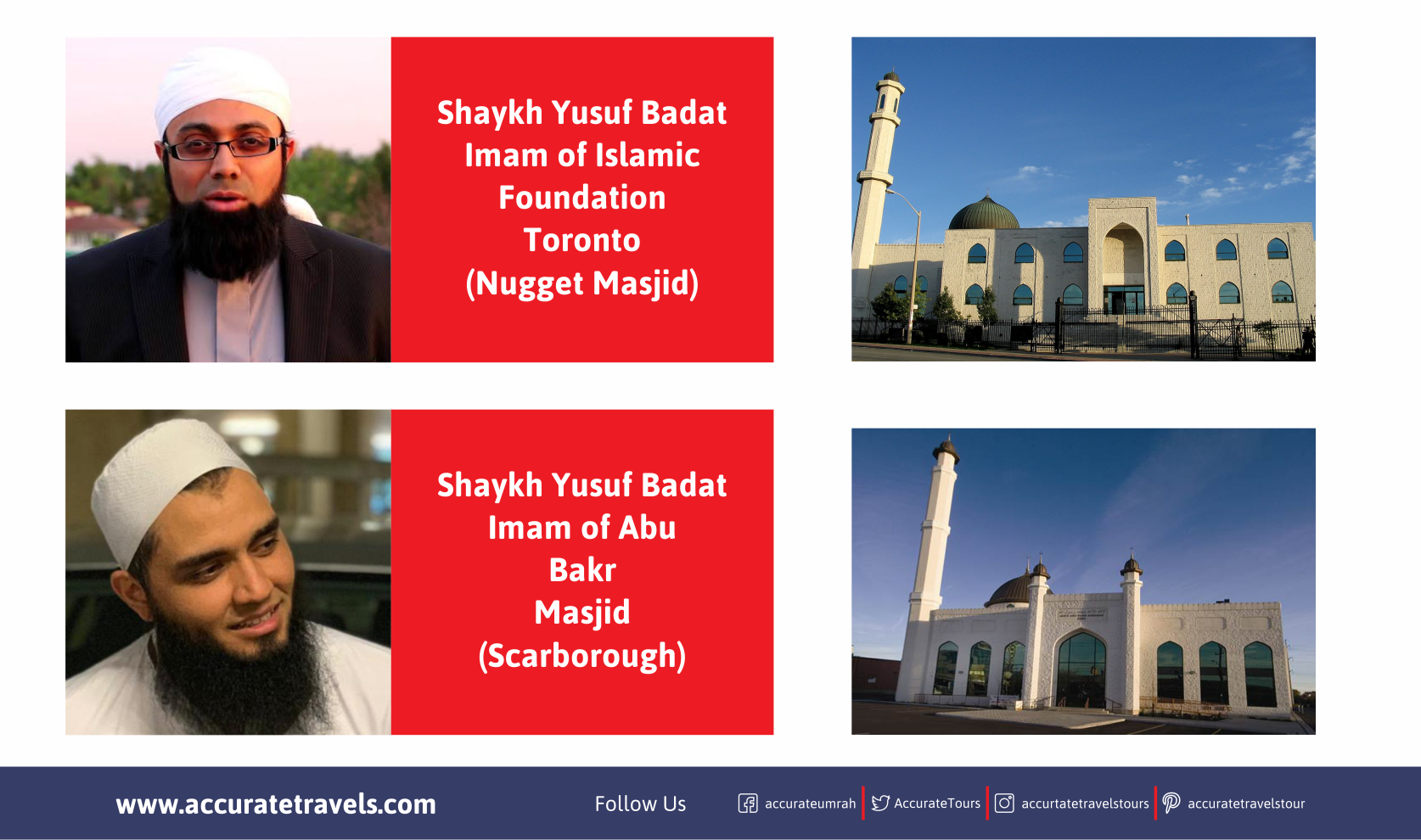 All packages of Accurate Travels & Tours INC are approved under the guidance of our Tour guide Maulana Shaikh Yusuf Badat, a well known Imam in Canada. Maulana Shaikh Yusuf Badat worked as an Imam at Masjid Anwar-Ul–Islam of Malton (Masjid Saleheen) in Mississauga, Canada since 1999. At the age of 14 years he completed memorization of Quran. He received various formal authorizations in sacred sciences with top honors.

He completed a rigorous six years Aalim course at Dar-Ul-Uloom Zakaria, South Africa where he attained masters in the Islamic studies also. He attained expertise in Hadiths under grand Mufti of South Africa Sheikh Raza-Ul-Haq. Shaikh Yusuf Badat is an Ontario registered minister of religion and licensed marriage officer, Also he is a diploma holder in Network Administration from Toronto School of Business. Maulana Shaikh Yusuf Badat is the Director of Religious Affairs’ at the Islamic Foundation of Toronto. He has been teaching Arabic, Islamic Studies, Quranic Studies and World Religions at the Islamic Foundation School and was an instructor at the Toronto Shariah Program and the Uloom Program. Maulana Shaikh Yusuf Badat is the founder and director of Mathabah Foundation. He is an active executive member of the Canadian Council of Muslim Theologians CCMT. Currently he is the Imam of Nugget mosque in Toronto.

Travel Itinerary of Accurate Travels & Tours INC are prepared under Maulana Shaykh Yusuf Badat, who is a well informed regarding the history geography and politics of countries mainly Spain, Jordan or Masjid Aqsa in Palestine.

Another scholar guide of Accurate Travels &Tours INC is Maulana Shaikh Shoaib Wardak. Just like Maulana Shaykh Yusuf Badat, he too completed memorization of holy Quran at the age of 14yrs. He did Six years Alim course at Jamia Al Uloom Al Islamia in Ajax, Canada. He was an alumini of well renowned Dar-Ul-Uloom Zakaria, South Africa where he completed further two years Alamiyat course.

His studies are based on traditional Dars-e-Nizami, He had studied under the guidance of Maulana Raza-Ul-Haq, Qari Ayub Essack and Maulana Shaikh Sulaiman Moola, he had attended various Tablighi Jamaats (giving dawahs, inviting people towards the work of deen) in Subcontinent (India, Pakistan and Bangladesh). Maulana Shaykh Shoaib Wardak is currently working as a teacher at Al Amanah Islamic Academy, along with this he conducts weekly tafseer at Jame Abu Bakr  Siddique, and also weekly Friday sermons.

Maulana Shaykh Shoaib Wardak is the main person who leads Umrah and Hajj group, He has very good leadership qualities and is well-versed scholar in explaining the rituals and Azkars required for performing Umrah and Hajj.